This bash script enhances your OSX/Linux console. The console or “terminal” on macOS comes in the basic equipment therefore it is very slim. This is good as long as you do not work with it every day. If you often go into the console, you should do something for your eyes and install the Solarized colorscheme theme. If you working a lot with GIT, then bashlight can be you a great help. The Bash extension offers you information for Branch and status of your current GIT repositories. Furthermore it contains many commonly used aliases, which allow for fast working on the console. Let your colleagues be amazed !

The chess figure represents the branch you are on. Git flow is also supported.

You are able to add informations to you prompt by setting following environment variables.

Set this variables in your .bashrc (Linux) ord src/profile (macOS) file like so:

On macOS and Linux, you have the option to send notifications from the console. However, the commands are different for this purpose. bashlight provides you a unified interface. You can play sounds, open the message window and use the voice output.

Note: On macOS you can use two arguments. 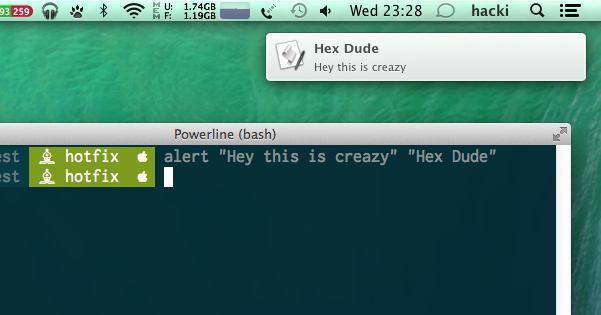 It also include a shell script to set common global bash settings. Before you run the file, take a look in the file. The setting included are tailored to bashlight.

1. get the source code

~/.bashrc on linux or ~/src/profile on macOS

3. Include bashlight/bashlight with the following line at the end of the file

To install common git and tmux settings are tailored with use for bashlight simply run:

You can contact me (@vergissberlin) or TheDevMinerTV (@TheDevMinerTV) on GitHub. Use the issue tracker to report bugs.

Made with love and